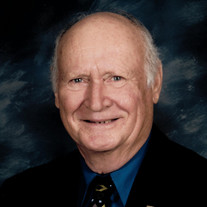 Wallace D. Arceneaux, Jr. entered eternal peace on February 11th, 2021, surrounded by the love of his family. Wallace was born September 17th, 1939, in Lockport LA, the son of Wallace and Catherine Arceneaux, Sr. Wallace attended Holy Savior School as a young boy then served his country in the Air Force during the Korean Conflict. During this time, he also married his sweetheart, Robbie Wiggins Arceneaux. They then celebrated 62 years of marriage and grew their family to include three natural children, and five grandchildren, one of which he raised as another daughter. Wallace was a loyal member of the Masonic Lodge #427 servicing as Worshipful Master for three terms. He is also an Eagle Scout who has brought the gift of scouting to many young boys as their Boy Scout Troop Master. Wallace dedicated 23 years of his life teaching young men diesel mechanics and the art of auto body repair at Central Lafourche High School. His passions and hobbies included restoring antique automobiles, working with his hands on crafty, detailed projects, and building his own home. His talents, skills and expertise are second to none. In addition to his parents, he was predeceased by his beloved wife, Robbie, their baby girl, Wanda Lee and his sister, Myrtle Martin. He is survived by his daughters Patricia Arceneaux and Heidi Arceneaux and son, David Arceneaux, along with grandchildren Dustin Arceneaux, Logan Arceneaux, Elise Vegas, and Jules Arceneaux. He is also survived by his brothers Guy and Cerita Arceneaux, Chris and Gayle Arceneaux, and sister Kathleen Uzee along with numerous godchildren, nieces, and nephews. Wallace dearly loved and took exceptional care of his family and will be missed by all. The celebration of Wallace’s life will take place on Saturday, February 20th, 2021 at Holy Savior Church, Lockport, LA.; beginning at 10:30 followed by a Mass and Christian burial at 11:00am. “Your life was full of loving deeds, forever thoughtful of our special needs, today and tomorrow, my whole life through, I will always love and cherish you.” “Peace I leave with you; my peace I give you. I do not give to you as the world gives. Do not let your hearts be troubled and do not be afraid.” John 14:27 “Blessed is the man who remains steadfast under trial, for when he has stood the test, he will receive the crown of life, which God has promised to those who love him.” James 1:12

The family of Mr. Wallace D. Arceneaux created this Life Tributes page to make it easy to share your memories.

Send flowers to the Arceneaux family.