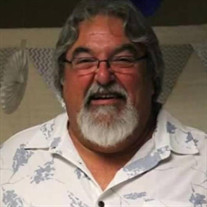 ﻿We are sad to announce that Captain Russell J. Adams, 65, made his final voyage on September 20, 2021. Russell was born on June 28, 1956. Russell was a life long boat captain. While spending most of his time at work as a supply boat captain, he also spent his time off work on the water as well. Like a true Cajun man, Russell loved to fish for speckled trout with his family and to catch shrimp in his trawl boat with Ozzy Osbourne on full blast. He was also an avid deer hunter with a strong love for backstrap and fresh green onion sausage. Russell was a Freemason, and proud of it. He served as Master of the Lodge just like his father, Ignace “Pete” Adams. He loved all his brothers, and was loyal to his Lodge. He loved to spend time with his grandchildren, and made it a point to teach them his love for the great outdoors. He would always do anything he could to put a smile on their faces. Above all, Russell was a kind hearted man. A man who would do whatever he could to help out a friend or family member in need. He extended himself to bring laughs out of anyone with his dry humor and situational sarcasm. One could only hope to have the grit, love, and patriotism shown by Russell throughout his life. Russell was preceded in death by his beloved wife Molly B. Adams, his parents Ignace and Gustavia Adams, and Godchild Patrick A. Chandler Jr. Russell is survived by his two daughters, Lacy Guidry (Alan) and Louise Galliano (Nick); step-sons, Jude Lasseigne (Marissa), Nickless Lasseigne; grandchildren, Alex Guidry, Brennen Thibodaux, Olivia Pellegrin(Gavin), Molly Galliano, Noah Galliano, Lanie Lasseigne, Lucie Lasseigne, Hunter Lasseigne; great grand child, Hadley Thibodaux. sister; Debra Chandler and a host of loved nieces, nephews, cousins, and dear friends. Visitation will be held on Monday September 27, 2021 from 9:00am until funeral time at Sacred Heart Catholic Church. A Mass of Christian Burial will be celebrated at 11:00am with burial at Cheramie Cemetery.

&#65279;We are sad to announce that Captain Russell J. Adams, 65, made his final voyage on September 20, 2021. Russell was born on June 28, 1956. Russell was a life long boat captain. While spending most of his time at work as a supply boat... View Obituary & Service Information

The family of Mr. Russell Adams created this Life Tributes page to make it easy to share your memories.

Send flowers to the Adams family.