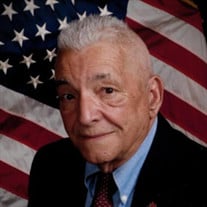 Robert “Bob” J. Voros, Sr., 86, a native of Duquesne, PA and a resident of Luling, LA, passed away on Thursday, January 6, 2022. Visitation will be from 10:00 am until 12:00 pm on Tuesday, January 11, 2022 at St. Anthony Catholic Church, Luling, LA. A Mass of Christian Burial will be celebrated at 12:00 pm. Private burial will be at a later date at Port Hudson National Cemetery. He is survived by his children, Sue Candies (Jerry), Robert “Rob” Voros, Jr. (Emily) and Sandy Johnson (Jeff); grandchildren, Brianne Voros, Marissa Voros Prieto (Al), Eli Johnson (Heather), Emmet Johnson (Bailey) and Dalton Candies (Dixie); great grandchildren, Remi and Abel and one on the way. He was preceded in death by his wife, Elizabeth “Beth” Voros; parents, Colman and Bessie Voros; brother, Alex and Colman Voros and sister, Helen Toth and Clara Sebula. Bob was a parishioner of St. Anthony Catholic Church, member of the Knights of Columbus, helped with Senior and Special Olympics and a mentor for St. Charles Schools. He was also a Ham and Mars Radio Operator. He sailed the 7 seas on an Icebreaker. Falgout Funeral Home is in charge of arrangements.

The family of Robert "Bob" John Voros Sr created this Life Tributes page to make it easy to share your memories.

Send flowers to the Voros family.