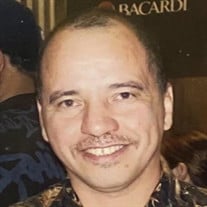 Rickey Paul Dardar, 57, a native and resident of Larose, passed away on Wednesday, September 29, 2021. Visitation will be from 5:00 pm until 9:00 pm on Thursday, October 7, 2021 and from 8:00 am until 11:00 am on Friday, October 8, 2021 at Falgout Funeral Home, Raceland, LA. Religious services will be at 11:00 Friday at the funeral home. He is survived by his daughter, Asia Dardar; former wife, Doreen Dardar; mother, Carmen LeBoeuf; brothers, Daniel LeBoeuf (Jeanne), Raymond LeBoeuf (Tabitha), Jessie LeBoeuf (Jocelyn), Leroy LeBoeuf, Jake LeBoeuf (Buffy), Dominic LeBoeuf; sisters, Lori Arroyo (Jose), Rita and Judy; godchild, Alana Billiot (Aaron) and 3 nephews and 4 nieces. He was preceded in death by his father, Ernest LeBoeuf, Sr. and brother, Ernest LeBoeuf, Jr. Rickey was employed by Edison Chouest Offshore for 30 years. He was a member of the Golden Gloves Boxing Club and a member of the United Houma Nation. Falgout Funeral Home is in charge of arrangements.

The family of Rickey Paul Dardar created this Life Tributes page to make it easy to share your memories.

Rickey Paul Dardar, 57, a native and resident of Larose, passed...

Send flowers to the Dardar family.