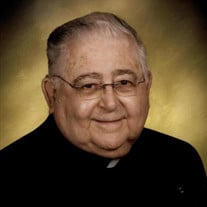 Rev. Msgr. Donald L. Ledet, died on July 25, 2021. A priest of the Houma-Thibodaux Diocese, he was born in Thibodaux, LA. on April 27, 1936, the son of Ellis and Elma Robichaux Ledet. He received his elementary schooling in Thibodaux at Mt. Carmel Academy and Thibodaux College. He attended St. Joseph Seminary in St. Benedict, LA. from 1951 to 1957 and Notre Dame Seminary in New Orleans from 1957 to 1963 where he earned a BA in philosophy and a MA in history. He was ordained to the priesthood for the Archdiocese of New Orleans in St. Louis Cathedral on May 25, 1963. He served his diaconate internship at Immaculate Conception Church in Marrero, LA. He was assigned to his first pastorate at St. Charles Borromeo Parish in Pointe-aux-Chenes, LA. on June 26, 1971; on February 3, 1973, he was appointed pastor of Our Lady of Perpetual Help Parish in Kenner, LA. In June of 1977, he joined the newly formed diocese of Houma-Thibodaux where he was assigned in residence to St. Joseph Church in Thibodaux, LA. On February 15, 1979, he was appointed pastor of St. Mary’s Nativity Parish in Raceland, LA., a position he held until his retirement on June 1, 2001. In retirement, he moved into St. Patrick’s rectory in Gibson, LA. He then lived in residence at Our Lady of Prompt Succor in Golden Meadow, LA. and later at Annunziata in Houma, LA. In 2010 he moved to St. Joseph Manor where he served as chaplain until Jesus called him home. He is survived by his brothers, Carroll Ledet and wife Joan, Ellis Ledet and wife Cathy, sisters Mary Ann Ledet, Beverly Gaubert and husband David, and Anita Brown; sister-in-law Nell Ledet, and many nieces and nephews. He was preceded in death by his parents, Ellis J. and Elma R. Ledet, brothers, Lee and Gary Ledet and an infant sister, Lois Ledet. Visitation will take place at St. Joseph Co-Cathedral on July 30, 2021 from 9:30 am until funeral time at 11:00 am. In lieu of flowers, donations to St. Mary’s Nativity School in Raceland are preferred. The family would like to thank the staff and residents of St. Joseph Manor for their kindness and loving support given to him during the past few months. The excellent care by Dr. Boudreaux, Dr. Vander and all medical personnel is much appreciated. Falgout Funeral Home is in charge of arrangements.

Rev. Msgr. Donald L. Ledet, died on July 25, 2021. A priest of the Houma-Thibodaux Diocese, he was born in Thibodaux, LA. on April 27, 1936, the son of Ellis and Elma Robichaux Ledet. He received his elementary schooling in Thibodaux at Mt.... View Obituary & Service Information

The family of Rev. Msgr. Donald L. Ledet created this Life Tributes page to make it easy to share your memories.

Send flowers to the Ledet family.