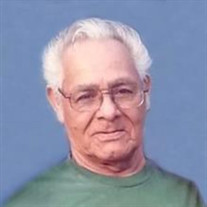 Raymond Joseph Billiot, 81, a native of Golden Meadow, La. and resident of Galliano, La. passed away on August 27, 2021 with his loving family at his side. Visitation will be on October 16, 2021 at Christian Family Center from 1:00pm until... View Obituary & Service Information

The family of Mr Raymond Billiot created this Life Tributes page to make it easy to share your memories.

Raymond Joseph Billiot, 81, a native of Golden Meadow, La. and...

Send flowers to the Billiot family.