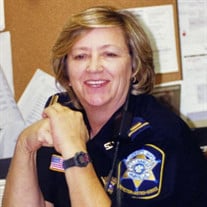 Pamela Elaine Bussell Negrotto, 76, of Bayou Gauche, La., died at 2 a.m. Sunday, July 18, 2021, in St. Charles Parish after an extended illness. Born in Delhi, La., on Sept. 23, 1944, to the late Herbert W. Bussell and Ruby Lee Stokes, Negrotto was raised in Epps, La. Cotton was king in Epps, and the Bussell family earned a living picking crops. Negrotto would later say the work was hard but fun. “I remember the long, hot days turning rows and filling the large blanket at the end of the row,” she later said. It was Negrotto’s intention to pursue bookkeeping after graduating from Epps High School. But she went to beauty school instead and worked briefly as a hairstylist. “I knew right away that wasn’t going to be the career for me,” Negrotto said, smiling at the memory. The Louisiana native relocated to St. Charles and met Johnny Marino, the parish’s late sheriff. At his urgence, she joined the sheriff’s office. In January 1977, Negrotto accepted a job as a 911 dispatcher. During her 39-year SCSO career, Negrotto rose through the ranks and oversaw the Juvenile Division and, later, the School Resource Office and Domestic Violence programs in the Special Services Division. In September 2005, Lt. Negrotto formally retired from the agency, but continued to serve in a part-time role through September 2017. “I came up when women weren’t deputies, they were dispatchers. Early on, Sheriff Marino saw something in me and I was able to grow,” Negrotto said shortly before her death. “There have been a number of good people who encouraged me and helped me throughout my career. I didn’t do it alone.” Current Sheriff Greg Champagne said of Negrotto, “She was always a pleasant soul to work with who impacted the lives of many. Pam will be missed.” Likewise, retired Special Services captain Pat Yoes, president of the National Fraternal Order of Police, lauded Negrotto’s compassion, mentorship and knowledge of the law. “She knew the law and what needed to be done,” he said. Fellow retired SCSO lieutenant and longtime friend Pam Schmitt cited Negrotto’s commitment to the parish’s youth. “There’s no question she turned around a number of lives – young and older. She championed local children and women who were the victims of abuse. She wanted better for them and continued to seek out programs to help,” Schmitt said. “You would be hard-pressed to find someone who cared or gave more.” Negrotto enjoyed photography, playing the guitar, sipping wine with friends, and crisp fall nights around a fire. She was a Saints fan, rooted for all St. Charles Parish youth teams, and loved her family and friends. She is survived by her sister, Julia “Judy” Brown, and nephews Shawn (Kelly) Quarles, Chad (Janine) Brown and Jason Brown. She is preceded in death by her parents, and sisters, Barbara Bussell and Margaret Smith. Visitation will be held at Falgout Funeral Home in Raceland on Saturday, July 24th from 10:00 a.m. until funeral time. A Memorial Service will be held at the funeral home at 12:00 p.m. with burial to follow in St. Gertrude Cemetery. Falgout Funeral Home entrusted with arrangements. To send flowers or a memorial gift to the family of Miss Pamela B. Negrotto please visit our Sympathy Store.

The family of Miss Pamela B. Negrotto created this Life Tributes page to make it easy to share your memories.

Send flowers to the Negrotto family.