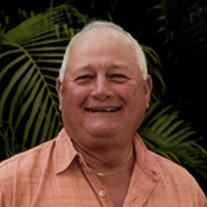 Palmer “Poochie” Cheramie, 73, passed away on September 16, 2021. He was born on March 14, 1948. Poochie was a native of Cut Off, LA., a longtime resident of St. Charles Parish, and currently resided in Larose, LA. Poochie proudly served his country in the U.S. Army. Poochie was an avid fisherman and enjoyed spending time at his “Happy Place”, Grand Isle. Being with his family and friends is what brought him the most joy in life. To know him was to love him. Poochie is survived by his wife, Joy Cheramie; four children, Brett (Kim) Cheramie, Casey (Jake) Cheramie, Madalyn (Danny) Danos and Seth (Stephanie) Guidry; grandchildren, Lauren, Ashley, Maggie, Gracie, Dane, Darby, Kaeli, Gabe, and Kenzli; siblings, Russell Cheramie, Pank Cheramie, Willa Mae Rodriguez, and Gladys Plaisance. Poochie was preceded in death by his mother, Eula Mae Cheramie; father, Clarence Cheramie; sister, Maenell “Minnie” Cheramie Douglas. Visitation will be held at Falgout Funeral Home in Raceland on Sunday, September 19th from 5:00 pm until 9:00 pm and resume on Monday at the funeral home from 9:00 am until funeral time. Funeral Services will be held in the funeral home at 12:00 pm with burial to follow in Sacred Heart Cemetery in Cut Off, LA. Falgout Funeral Home entrusted with arrangements.

The family of Palmer "Poochie" Cheramie created this Life Tributes page to make it easy to share your memories.