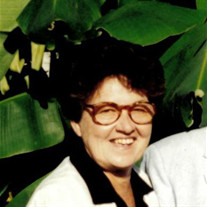 Mary Badeaux Griffin, 87, a native of Lockport and resident of Golden Meadow, passed away on Friday, October 29, 2021 surrounded by her daughters at home. She was born December 8, 1933. A private service will be held on Thursday November 4, 2021 with burial at Our Lady of Prompt Succor Catholic Cemetery. She is survived by her daughters, Cathy Savoie and Karen Guidry (John L. Guidry II); grandchildren, Reggie (Leila), Mark (Patricia), Jean(Casey), Celeste (Corey), Casey (Jason) and John (Amy); great grandchildren, Mark, Taylor, Jacie, Gracie, Trista, Carter, John David, Camden, Tripp, Lola, Harlo, Holden, and Kayden, Addy, Alex and her great-great grandchildren, Jayden and Brent. She was preceded in death by her husband of 66 years Clovis Griffin, Jr., her parents Albert,Sr. and Cleophine Leonard Badeaux. Momma, Mom, Maw Maw, Maw, Mary Jean, or however you referred to her, had a heart of gold. She had a prayer list longer than you could imagine. She enjoyed visiting with family and friends and hearing stories about her grand kids. She always had a pot on the stove for whoever showed up. Her Sunday dinners were the best, especially when they included produce that she grew in her back yard. She loved gardening and keeping track of her crop in numbers. She was a successful hair dresser for many years. She was the most genuine person you could ever meet and would cater to anyone’s needs or wants. She was an avid Astros fan and a forced Yankees fan. She enjoyed afternoon coffee and toast while talking with Paw at the table. She was a servant to many and we know she is shining down on us all. We love you MORE!! Thank you Brent for the support and care during the storm and Journey hospice as they cared for maw until the end. Falgout Funeral Home is in charge of arrangements.

Mary Badeaux Griffin, 87, a native of Lockport and resident of Golden Meadow, passed away on Friday, October 29, 2021 surrounded by her daughters at home. She was born December 8, 1933. A private service will be held on Thursday November 4,... View Obituary & Service Information

The family of Mrs. Mary Badeaux Griffin created this Life Tributes page to make it easy to share your memories.

Mary Badeaux Griffin, 87, a native of Lockport and resident of...

Send flowers to the Griffin family.