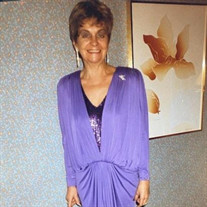 Marilyn Lee Sowerby Dominique, 90, a native of Marlboro, Massachusetts, and a resident of Houma, Louisiana, was born on October 29, 1930 and died on Monday, March 22, 2021. A Memorial Mass will be held on Friday, March 26, 2021 at 11AM at St. Bernadette Catholic Church of Houma, La. Military Honors will be conducted by the United Veteran’s League of Houma @ 10:30AM. Marilyn is survived by her son Stephen Dominique and daughter, Lynne Dominique both of Houma; and her sister-in-law Beverly Sowerby of East Portland, Maine. She is preceded in death by her husband Doughty J. Dominique, her parents Dorothy Kratt Sowerby and Charles Sowerby Sr. of New Hampshire, her brother Charles Sowerby Jr., and her daughter-in-law Kathy Dominique. Marilyn a beloved educator for 30 years, taught in both public and catholic schools. She attended Salters Medical Secretarial School in Worscester, Massachusetts, and served as the private secretary for the executive of L.M. Berry Advertising Agency. She also acquired a Realtor’s License. Marilyn rose to the rank of Sergeant in the U.S. Air Force serving during the Korean Conflict. After leaving the service, Marilyn attended Nicholls State University where she received where she received a B. A. degree in Education and then attended Tulane University for postgraduate studies. Marilyn was a member of the Terrebonne Fine Arts Guild, Inc. where she served on the Board of Directors and held various offices such as President, Corresponding Secretary, and Recording Secretary. She also belonged to the United Veterans League of Houma, La. and the Crescent City Veterans Post 125 of New Orleans, La. where she served as their Historian. She was a charter member of the Women’s Military Memorial of Washington, D.C. In lieu of flowers, donations can be made to St. Bernadette Catholic Church or to Disabled American Veterans. Falgout Funeral Home is in charge of arrangements.

The family of Marilyn Sowerby Dominique created this Life Tributes page to make it easy to share your memories.

Send flowers to the Dominique family.