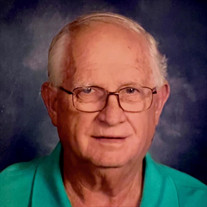 Louis P. Griffin, Jr., 74, a native of Golden Meadow, LA and a resident of Cut Off, LA, passed away on Monday, March 7, 2022. Visitation will be from 9:00 am until 11:00 am on Saturday, March 12, 2022 at Sacred Heart Catholic Church, Cut Off, LA. A Mass of Christian Burial will be celebrated at 11:00 am with burial to follow in the church cemetery. He is survived by his wife, Patsy T. Griffin; children, Anita Griffin Alcorn (Tyler), Colette Griffin and Jason Griffin (Kara); grandchildren, Taylor, Rylie, Nicholas and Gigi; brothers, Curment (Mona), Dean (Holly) and Ernie Griffin (Chantelle) and sisters, Edwanna Kieff (John) and Maureen Pagliughi (Peter). He was preceded in death by his parents, Louis “Cookie” Griffin, Sr. and Dudline “Rat” Griffin. Louis retired from Texaco, was a member of the Knights of Columbus, Pelicans Bible Group, founder and president of Friends of Special Citizens, 1986 Citizen of the Year for the Chamber of Commerce; 1987 Tri-Parish Volunteer Activist, Special Olympics coach, first recipient of the Ellen King Gillentine Memorial Volunteer Award; inducted in the Louisiana Special Olympics Hall of Fame and past King of the Krewe of Atlantis. He enjoyed fishing, hunting, art, and fundraising for special needs citizens. He loved spending time with his family and will be greatly missed. Falgout Funeral Home is in charge of arrangements.

The family of Louis P. Griffin Jr. created this Life Tributes page to make it easy to share your memories.

Send flowers to the Griffin family.