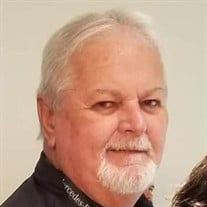 David “Dov” Paul Matherne, 63, a native and resident of Larose, LA, passed away on Thursday, February 17, 2022. Visitation will be from 10:00 am until 12:00 pm on Tuesday, February 22, 2022 at Holy Rosary Catholic Church, Larose, LA. A Mass of Christian Burial will be celebrated at 12:00 pm with burial to follow in the church cemetery. He is survived by his wife, Nora Jean Crochet Matherne; son, Jody Paul Matherne (Brandie); grandchildren, Paige, Jace, Kylee and Stormy; brother, Ernest Matherne and sister, Louella Doucet. He was preceded in death by his parents, Early Matherne and Irene Bychurch Matherne; brother, Edward Matherne and sister, Claudette Hebert. Pallbearers will be, Jody Matherne, Jace Matherne, Cody Borne, Raimy Eymard, Ernest Matherne and Clyde Guidry. Honorary pallbearers will be Ted Hebert, Fred Hebert and Robert Dupre. “Dov” enjoyed hunting, camping and fishing and was an avid Saints fan. He loved spending time with his family, especially his grandkids. He followed all of them to any sporting event they were playing in. He will be greatly missed. Falgout Funeral Home is in charge of arrangements.

The family of David Paul Matherne created this Life Tributes page to make it easy to share your memories.

Send flowers to the Matherne family.