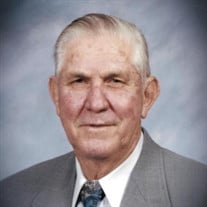 Clifford Joseph Lagarde, 94, a native of Taft, LA and a resident of Raceland, passed away on Monday, September 13, 2021. Visitation will be from 9:00 am until 11:00 am on Saturday, September 18, 2021 at Falgout Funeral Home, Raceland, LA. Religious services will be celebrated at 11:00 am at Falgout Funeral Home with burial to follow in the St. Mary Cemetery. He is survived by his wife, Doris Arcement Lagarde; one son, Chris Lagarde and wife Shelly, one daughter-in-law, Dawn; one sister, Annabelle Troxler; five grandchildren, Christopher Joseph Lagarde (Samantha), Christopher Michael Lagarde (Josie), Jeffrey Michael Lagarde (Sherie), Angela Lagarde, Brooke Lagarde Plaisance (Lee) and five great grandchildren, Ethan, Caroline, Hunter, Claire, Emily and Reese. He was preceded in death by his son, Troy Lagarde; parents, Harris and Edith Boudreaux Lagarde; one brother, Francis Lagarde, one sister, Beatrice Lagarde and loving aunt, Jeanne Lagarde. Clifford was a veteran of World War II and served in the army air force. After his discharge form the services, he and several veterans from the area got together, with the help from the Thibodaux Post started the Raceland American Legion Post 349. He was a member of the American Legion Post 349 for 71 + years. He was charter member, Life member and a 4 generation member. He was a past commander and held many other offices. He served on the Board of Directors, for the American Legion for many years, He worked tireless to make sure the home was paid for. Every weekend he volunteered to cut the grass and clean the home, worked for every wedding and the bingo games at that time. He was a member of the St. Mary Nativity Holy Name Society and passed the collection each Sunday until his health gave out. He was a member of the Friends of the Library, the Senior Citizens and served as a volunteer fireman when he was young. Clifford spent most of his life working as a carpenter and built many many homes in the area. With his God given talent as a carpenter, he repaired the old St. Mary Nativity Church twice, the church rectory twice, the St. Charles Catholic Church addition, built the cross that is still used each year at Easter time at St. Hilary Catholic Church, built the chairs that were used on the altar at St. Hilary and are now at St. Anthony is Gheens. He was a loving husband, father and grandfather and great grandfather and will be sadly missed by everyone who knew him. He loved to read, play word games, do puzzles and watch movies. Special thanks to his son Chris and daughters-in-law, Shelly and Dawn for the excellent care during his short illness. Falgout Funeral Home in in charge of arrangements.

Clifford Joseph Lagarde, 94, a native of Taft, LA and a resident of Raceland, passed away on Monday, September 13, 2021. Visitation will be from 9:00 am until 11:00 am on Saturday, September 18, 2021 at Falgout Funeral Home, Raceland, LA. Religious... View Obituary & Service Information

The family of Clifford Joseph Lagarde created this Life Tributes page to make it easy to share your memories.

Clifford Joseph Lagarde, 94, a native of Taft, LA and a resident...

Send flowers to the Lagarde family.