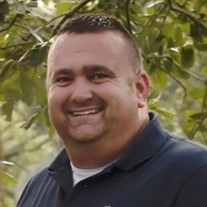 Caleb Michael Bergeron, 35, was welcomed unto the arms of the Lord on January 6, 2022. He was a native of Ama and a resident of Luling. He was born on October 10, 1986. Visitation will be from 9:00 am until 11:00 am on Tuesday, January 18, 2022 at Holy Family Catholic Church, Luling, LA. A Mass of Christian Burial will be celebrated at 11:00 am with burial to follow in St. Charles Cemetery, Luling, LA. He is survived by his awesome wife Sarah Bergeron and his two beautiful children, Aubrie “Princess” and Grayson “Stinky” Bergeron. Along with his parents, Percy and Sabrina Bergeron; sister, Danielle and Grover “Bil” Badeaux and his nephews, Brady “the favorite”, Brock “the fot nocker”; his in-laws, Kevin and Susan Dunne; brother-in-law Willie and Sara Dunne and their children, Lucas, Sophia and Nicholas Dunne; great grandparents, James Breaux and Lillian Bergeron. Also survived by numerous aunts, uncles, Cousins and his padna (yall know who you are) and don’t forget Nanny Bell “the one and only” and Aunt Danette (B****) He was preceded in death by Lena C. Breaux “greatest woman alive”, James J. Breaux and Rodney J. Breaux, Percy Bergeron, Henry Bergeron and Rose Loveless. He was a graduate of St. Charles Catholic High School and River Parish Community College. He was employed by Dyno Nobel Inc. (World Class Operations). He was the United Steel Workers Chairman of Dyno Nobel Group and served on the executive board of local 13-447. He was an avid outdoorsman. If it’s brown it’s down, if it flies it dies. He loved hunting and fishing. Although he did not kill his limit this year we’re hoping he sends us all a big buck soon. He was a strong family man. His wife and children were his life, along with his new truck. Falgout Funeral Home is in charge of arrangements.

The family of Caleb Michael Bergeron created this Life Tributes page to make it easy to share your memories.

Caleb Michael Bergeron, 35, was welcomed unto the arms of the...

Send flowers to the Bergeron family.