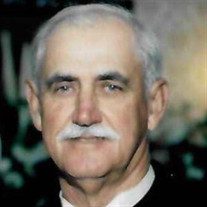 Aurestile M. “Tooley” Navarre, 74, a native of Golden Meadow and resident of Cut Off and Raceland passed away on Saturday, November 27, 2021. Visitation will be held at Sacred Heart Catholic Church on Wednesday, December 1st from 10:00 a.m. until funeral time. A Mass of Christian Burial will be celebrated at 12:00 p.m. with burial to follow in the church cemetery. Tooley is survived by his wife of 50 years, Cynthia Adams Navarre; daughters, Jill (Corey) McMellon and Kim (Brent) Douglas; grandchildren, Carter and Wes Douglas; sisters, Beverly Curole, Jeanne Gaudet and Theresa (Gene) Guidroz; brother, Philip (Sybil) Navarre. Tooley was preceded in death by his parents, Alvin, Sr. and Julie Navarre; brother, Alvin (Maybelle) Navarre, Jr.; sister, Ruby (Roger) Collins; brothers-in-law, Harrison Curole and Gilmer Gaudet. Tooley was a loving husband, father, grandfather, uncle and friend. He was a Vietnam War Veteran, serving in the US Army from 1967 to 1969. He was secretary of the American Legion Post 259 in Golden Meadow and a member of the Greenhead club. Tooley enjoyed fishing, baking (his famous tea cookies) and helping people no matter who you were, where you came from or what you may have needed. He loved spending time with his family and friends, but especially attending sports games with his Carter and Wes. The family would like to thank Thibodaux Regional Cancer Center, Dr. Mohammed Khokhar and everyone who provided loving care for Tooley. In lieu of flowers, donations can be made to Thibodaux Regional Cancer Center or American Cancer Society. Falgout Funeral Home entrusted with arrangements.

Aurestile M. &#8220;Tooley&#8221; Navarre, 74, a native of Golden Meadow and resident of Cut Off and Raceland passed away on Saturday, November 27, 2021. Visitation will be held at Sacred Heart Catholic Church on Wednesday, December 1st from... View Obituary & Service Information

The family of Mr. Aurestile M. "Tooley" Navarre created this Life Tributes page to make it easy to share your memories.

Send flowers to the Navarre family.